Our team at Fantasy XV Draft have had a great time delivering high quality Fantasy and injury news for the Super Rugby competition over the last few years. 2019 has provided us the opportunity to offer something much much greater to the rugby loving community. As fanatical fans of Fantasy Rugby ourselves, we have decided to fill the gaping hole left by Fox Sports exit for the 2019 season.

We have run our own private fantasy competition since 2012. Each year 8 mates go head to head in a ‘Draft’ style league built off excel spreadsheets and Facebook chats. To say we are fanatical is an understatement. This is a league where an in depth understanding of form, history and injuries are a bare minimum. Each manager has built their own formulas searching for the ‘magic statistics’ that will give them the edge (e.g. points per minute, 3 or 5 game form, value based drafting, value of last picks etc).

Our competition promotes banter and manager involvement. The chat room is all important to heckle your competing manager each week, and we would meet every Thursday night at a pub to put through player trades once most team lineups have been announced (we highly recommend doing it this way!). We have also raised the bar each and every year to reward our champions and shame our wooden spooners, ranging from trophies to championship rings for the winners, and stand up comedy routines for the losers.

Introducing Draft Rugby. We are excited to share “the game they play online in heaven” with all of you. We are re-branding to focus on our new project, so all of the content you have enjoyed will be found through the news and articles on our new website draftrugby.com.

If you’ve followed our announcements on social media you’ll see that the basis of our game follows three key values that we want to share with everyone:

Too often fantasy products seem impersonal, you detach from your competitors making the competition feel meaningless and eventually stale. We will change this by setting up leagues with a maximum of 8 players, you have the option to bring an entire league, or use it as a way to meet some new rugby loving friends. This means your competing against the same people throughout the season, creating a meaningful competition ladder. 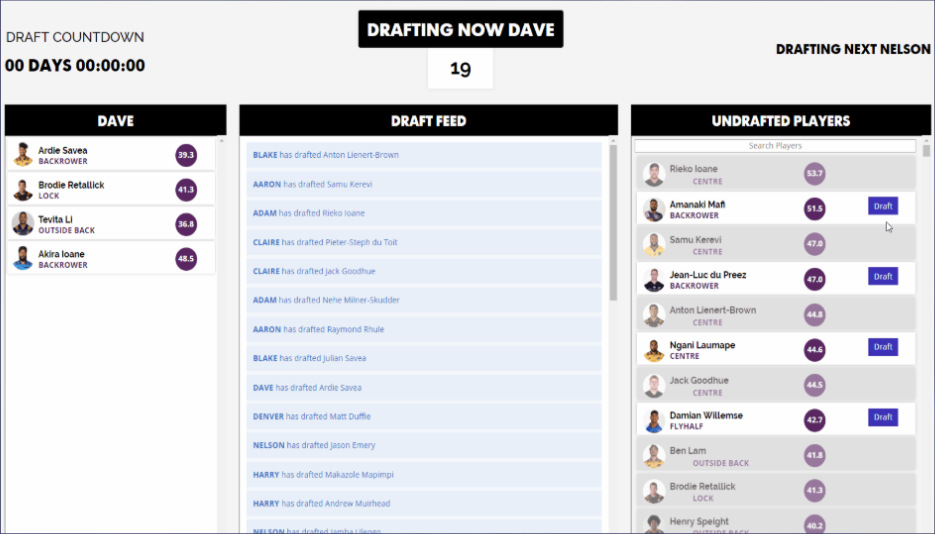 Probably the most important variation to our system is the ‘Draft’ style player recruitment.

In our competition each player can only be owned by ONE manager. This means that every pick you make in your initial draft holds extra importance. The initial draft will be run at a time of your commissioners choosing, for all your leagues competitors to pick their entire 23 man squad. Pick the wrong players in the first few rounds and you’ll be facing an uphill battle. For example, one of our draft rookies decided to pick up Lachie Turner in the first round after he had moved overseas (WOW).

Each week you have the opportunity to trade with other managers or to pick up free agents, make the right decision and you’ll see yourself in the running for finals. Beware the ‘trade rape’, a classic case of experienced heads taking advantage of the more naive competitors.

Most fantasy competitions today pick players on budgets, and pit every manager against every manager across the season. This inevitably leads to huge amounts of overlap as everyone rushes to buy the same best players, and then you hope that your few key differences get you a win.

We have completely flipped the system! Not only do we have privately owned players, but you play your fellow managers in a round robin head to head competition. This builds rivalries and makes every week a new 23 man, unique match up challenge. Do you think you know more than your mates? It’s time to hold your mates rubbish chat about being the most knowledgeable fan to account by taking down his team 1 on 1.

Hopefully by now you’ve got a basic idea of what we are about, we have big plans to grow our platform over the next few years, so grab some mates and get on board the most exciting Fantasy or Draft Rugby competition in the world.

Check out our website and sign up at Draft Rugby to be updated with any major developments as we continue rolling them out.

Written by a man with a wife who is tolerant of how he uses his free time,